For the sculpture “Chef D’ Orchestre” by Alexander Calder for the composition. 100 percussion instruments are needed. Commissioned by the Percussion Quartet of Paris.

Claude Rostand felt Brown’s “Calder Piece” was, “one of the most enriching conquests of our time,” in Le Figaro Litteraire, August 21-27, 1967:

“…the dialogue between sound and color is established. Not an approximate and vague one between the sensibilities as it may already have existed in the past, but a dialogue which goes to the roots of things, to the very functional. A symbolic illustration of this has been offered us with this work of Earle Brown, where the conductor is of a new sort, a mobile by Calder, the movements of which determine the actions of the musicians.”

“…music of very rich imagination, of a very real poetry, and which permits me once again to mention the name of this American composer as representing one of the greatest talents which have recently come to us from the United States.”

Program Note (added to the score by Earle Brown 1980):

This work was first conceived and “designed” in the spring of 1963 while I was in Paris finishing the work on TIMES FIVE for the Service de la Recherche of the French Radio. At that time, the Paris Percussion Quartet commissioned me to compose a work for the group. Those who are familiar with my work are aware that the original impulse and influence that led me to create “open form” works (which, in 1952, I called “mobile” compositions) came from observing and reflecting upon the mobiles of Alexander Calder. I later met Calder at his home in Connecticut (in 1953) and he therefore knew of my work and my indebtedness to his concept and work. In Paris I began the work for the quartet with the idea that it would be “conducted” by a mobile in the center of the space with the four percussionists placed equidistantly around it, the varying configurations of the elements of the mobile being “read” by the performers and the evolving “open form” of each performance different and changing perspectives in relation to it. Calder was immediately intrigued and excited by the idea. The final scoring for the piece had to wait for the mobile to be finished because various aspects of the score and performance were directly based on the number of elements and their physical placement in the structure of the mobile. It was not until 1966 that everything came together and the work was finished. Calder named the mobile Chef d’ Orchestre. CALDER PIECE was first performed at the Théâtre de l’Atelier in Paris, early in 1967. In addition to the mobile functioning as a conductor, the musicians actually use it as an instrument. One is not conditioned to tolerate the striking of a work of art and the sounds of breath-holding could be heard in the audience when the musicians first approached and played the mobile. One of Calder’s slightly disappointed comments after that first performance was, “I thought that you were going to hit it much harder – with hammers.” The piece is one of a kind, and the music must never be independent of that particular mobile. It is my very deeply felt homage to “one of a kind” Sandy Calder and to his life and work.
Earle Brown
January 1980

Excerpt from the score of Calder Piece: 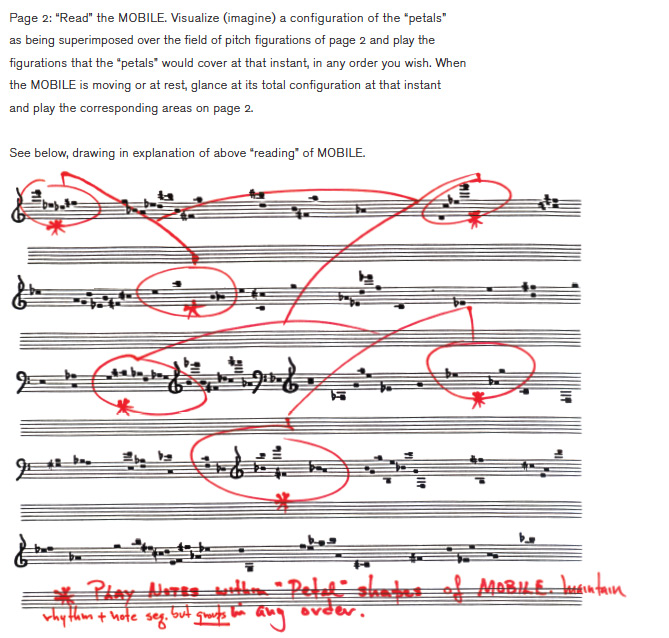 Click  to see a video of the November 10, 2015 performance at the Tate Modern London.

Video of the January 9, 2016 performance by Talujon: