FROM HERE was composed in 1963 on commission for the “Foundation for Contemporary Performance Arts”, New York, and first performed there in October of that year, conducted by the composer and Alvin Lucier (chorus). It is an “open form” work with nearly the same instrumentation as AVAILABLE FORMS I but the instruments are treated much more soloistically than in the “orchestral” style of that work. Being able to choose my musicians personally I tended to write material more personally oriented to their individual characteristics.

The sound materials are fully determined for the most part, (the continuity and final form that the materials take being determined by the conductors in each performance) there are some areas, however which are “graphically” notated, but the musicians must carefully follow the contours and textures of the graphics, only “improvising” their own pitches as suggested by the notation. It is again a balance between the “open-form, improvisational” scores of 1952 and the “open-form, composed material” works from 1953 to the present time. Either of the two extremes of total control or total freedom still seem to me to be avoiding one or the other of these two most urgent “poetic” potentials in today’s music.

The conductor of the orchestra is also conducting the conductor of the chorus, who is free to form the chorus material in “ear relation” to the instrumental continuity upon receiving a cue from the first conductor. As in AVAILABLE FORMS II and MODULES I & II, the relationship of the two conductor is sympathetically dependent “poetically,” but also independent to a large degree. In those two scores however, the conductors have equal potential of co-control of the final result but in FROM HERE the conductor of the chorus is definitely following the evolution of the form as principally controlled by the first conductor. The sound material of the chorus is phonetic and “graphic” and intended to complement the rather unusual sounds from the instruments. There are long sustained “chords” which later became a model for MODULES I & II,  in which sustained sonorities are the entire “subject” and only “energy” of (apparent) movement.

It has been said that it takes a great deal of faith in the creativity and musicianship of other conductors to leave the forming of my works to be influenced by other people and their individual sensitivities. I do believe in, and seek, this collaborative poetics of “music making,” and never more so confirmed than in the human musicality of Bruno Maderna; to whom my first co-conducted orchestral work is dedicated and inspired by: Available Forms II (1962).

Ensemble: The Orchestra of the S.E.M. Ensemble
Conductor: Petr Kotik 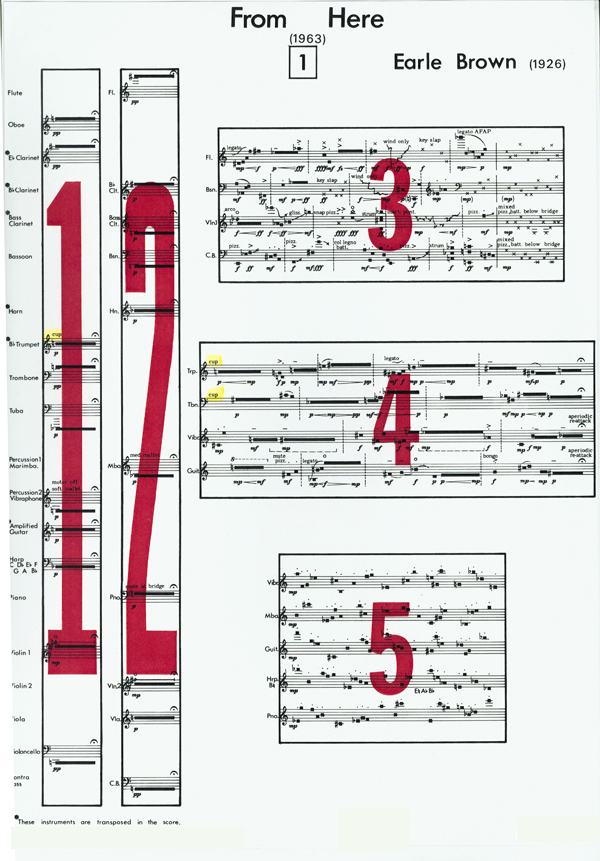