Commissioned by Merce Cunningam Dance Company for the dance “Springweather and People.”

The first performance of “Springweather and People” was at Bard College, Annandale-on-Hudson NY, 24 May 1955 Costumes by Remy Charlip, with the collaboration of Robert Rauschenberg, Ray Johnson, and Vera Williams.

A duet version, “Suite from Springweather and People,” was performed by Merce Cunningham and Carolyn Brown at the University of Pittsburgh, Pittsburgh PA, on 21 May 1958, and subsequently at the Kungl Teatern, Stockholm, Sweden, 5 October 1958, and at Das Neue Werk, Hamburg, Germany, 28 October 1958.

Further information on this work can be found in the book Merce Cunningham/Fifty Years (Aperture 1997), by David Vaughan and in Carolyn Brown’s memoir Chance and Circumstance (Knopf 2007).

About the compositional process, Earle Brown wrote:
Somewhere in the spring of 1954 I began sketching some thoughts about a work for chamber orchestra which was to be generated (“constructed”) by a book of 10,000 random numbers, called Random Sampling Tables. Although I had never been (personally) particularly interested in “chance” as Cage used it, my interest in the random tables was probably influenced by that way of working. But more than anything, the Indices idea was very close to the Schillinger concepts of ratios, densities, statistical distribution, rather than to the pure (or impure), “uninfluenced” CHANCE activities of Cage.

It took me two or three months just to set up the “program” (in the computer sense) for Indices, and about eight months to carry it out. It is called Indices because that is what the two points on the abscissa and ordinate, the intersection of perpendicular horizontal and vertical lines drawn from the two points, are called. The Indices “program” was intricate and terribly complex in all dimensions. The piece was not written from left to right (start to finish) but the “program” (of composing) was such that each sound was a completely self-contained “event,” each being able to appear anywhere within the 29-minute duration of the work as the program produced it…subject to the structural “stress” conditions. (There were 175 pages of rules score paper, which equaled 29 minutes at mm. 120. according to the “program” the first sound composed might have entered on page 107; the second sound might have entered on page 22; the third on page 136, etc.) It was a discontinuous process of composing the material and obviously the piece was not “finished” when I reached the “end” of it but when it became sufficiently “saturated (event-full). 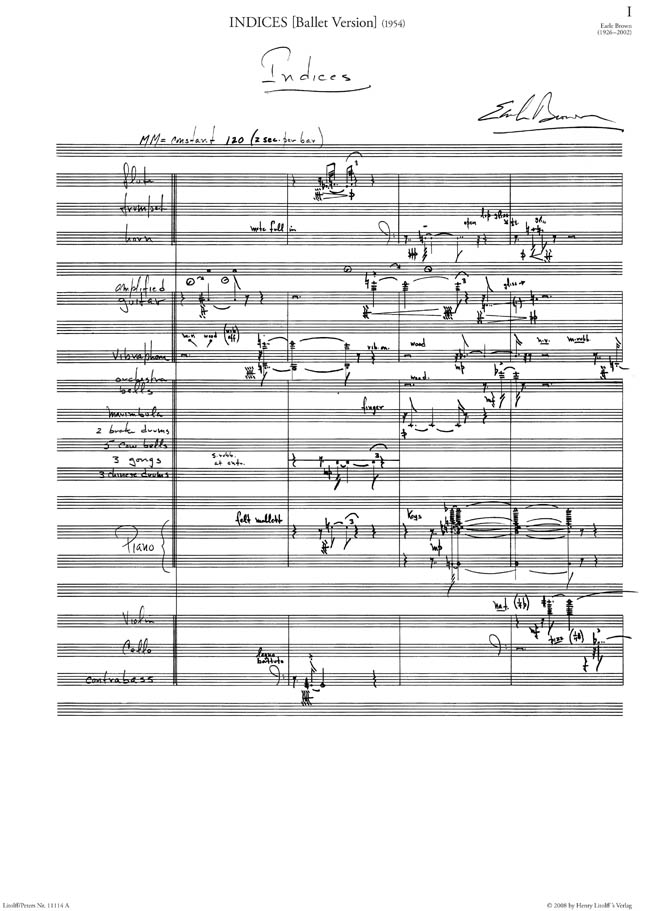