[The revised Peters Edition score of 2007 replaces all previous editions. Several errors in the previous score have been corrected in this edition.]

NOVARA was composed, at the request of Lukas Foss, for a Fromm concert at the Tanglewood Festival in the summer of 1962 and the first performance was conducted there by the composer. The work was written just after the composing and Venice premiere of AVAILABLE FORMS II (for 98 instruments and two conductors), and is a kind of “relaxing” into the intimacy and delicacy of chamber music and soloistic possibilities after the very large resources and massed orchestral sounds of that work. NOVARA is an “open-form” work and uses many of the less characteristic sounds of the instruments that are sometimes referred to as “noises” but are nevertheless instrumental sounds which can extend the formal and expressive potential of the work. “Open-form” means that all of the sound materials in the work are notated and controlled in the score but that their sequence, juxtaposition, tempi, and repetition are left to the spontaneous (during the performance) decisions of the conductor as the performing process develops and unfolds between himself, the sound materials and the musicians. The form of the work is therefore unique in each performance but it is always NOVARA because only those composed sound events may be used.
—Earle Brown 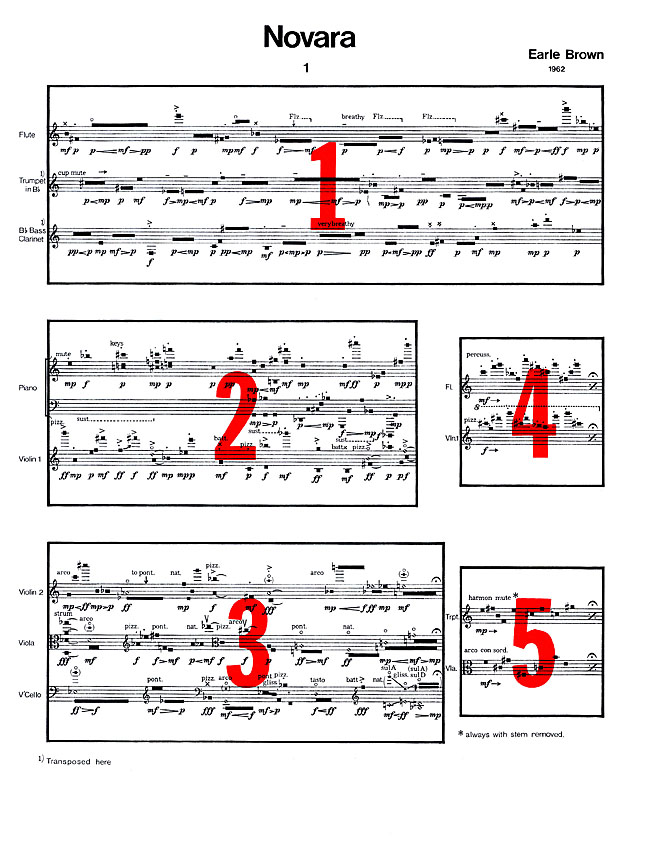