“Pentathis” was completed in the spring of 1958 and received its first performance at the “Internationale Ferienkurse für Neue Musik” in Darmstadt, Germany, in September of that year, with the “Domaine Musicale” orchestra conducted by Bruno Maderna. The work was written for the “Domaine Musicale” orchestra, at the request of Pierre Boulez, and was performed by that orchestra in Paris, under Ernest Bour, during the 1958-59 season.

“Pentathis” is neither twelve-tone nor serial in the familiar sense but is structurally evolved from the characteristics of this particular group of instruments and their possible relationships to the elements of sound. It is a principle in which the sound generates the numerical relationships rather than the reverse. This implies correctly that my ears are the first cause, from which a more or less “objective” structure is evolved. I attempt to exploit the instruments and their ability to produce various kinds of sound…from the historically “pure” sounds usually associated with these instruments to sounds usually characterized as “noise”…..and to engage as many combinatorial structures as my imagination and various compositional techniques can produce. At times I structure areas by an additive process whereby the individual instruments are the primary determinant and the end result is an accumulation of “linear” densities and configurations…(not a contrapuntal conception)  In this case there is a “random” factor employed as a compositional element and density becomes the secondary determinant. In other parts of the work there are large time areas in which the orchestra, considered as a single complex instrument, is the primary determinant and the instruments are secondary functions of the total. In this latter case I work with “acoustic” master structures, the determined elements of which are, frequencies, intensities, durations, timbral classifications, modes of attack and coefficients of density and transformation for each element. These two basically different approaches to the orchestra in the composing of the work result in at least two (and many more by interaction, modification etc.) different qualities of motion in the work. The question of motion and the factors inherent in sound relationships which create it (apart from meter and tempo…which I don’t consider inherent but merely imposed) is of much interest to me at this moment. In this work I have focused primarily on coefficients of density, the “acoustic” structures and random factors to produce whatever motion or lack of motion there is in it. I hope that the energy can be felt in the SOUND as well as in the tempo. 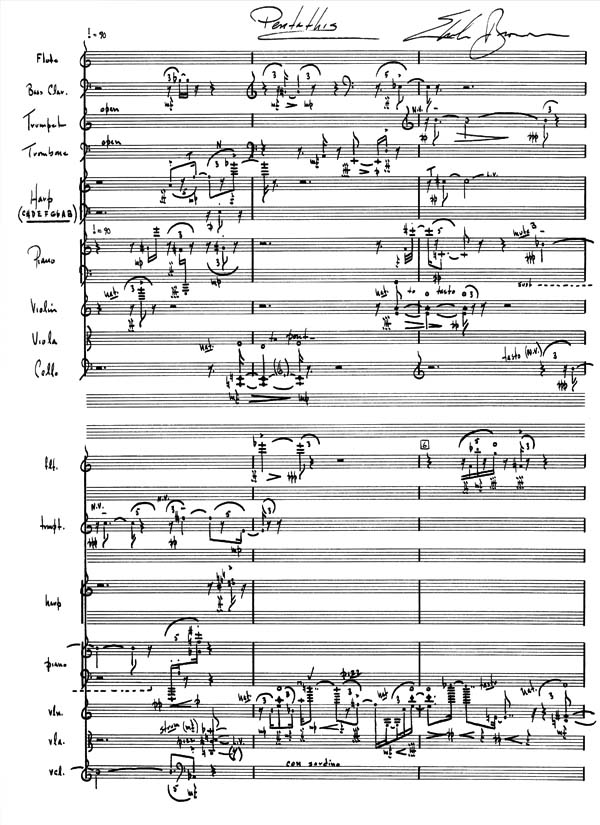