“THREE PIECES” for Piano (1951); “PERSPECTIVES” for Piano (1952) and “MUSIC FOR VIOLIN, CELLO AND PIANO” (1952)…all composed in Denver, Colo., are works which use 12 tone pitch rows and “serially” composed rhythmic groups. This juxtaposing of tone rows and rhythmic figurations and their virtually infinite possibilities of integral extension and variation was first suggested to me in my studies of Schillinger techniques but is also similar in concept to old techniques of “iso-rhythm(mic)” composition. I later discovered that Schillinger’s “rhythmic groups” are what Olivier Messiaen called “cellules”…as the word suggests, cells, subject to subdivision, multiplication, expansion, permutation, etc. Apart from these rather technical procedures I composed form, dynamics, melodic trajectories and densities very subjectively and spontaneously. My subjective personality tends to avoid the rather “dark” qualities of much 12 tone music of the time.
—Earle Brown 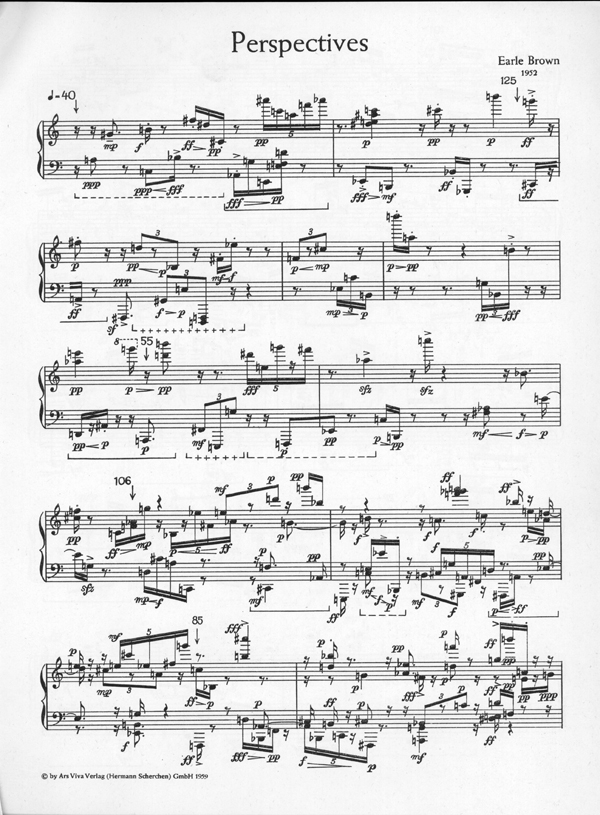